Reading from another book she wrote, “Ikinagaraete Yume (Dream after Long Journey to Come Back)” I learned what her life was like after she came back to Japan. After reading her first book, I was very anxious to know what kind of life was waiting for her in Japan. There is a photo of her “embroidery of chrysanthemum” on the cover. This extraordinary Japanese chrysanthemum embroidered one step at a time was the symbolism of Fumiko’s dignity that she never lost during her tumultuous life in Siberia. I gazed at its beauty. 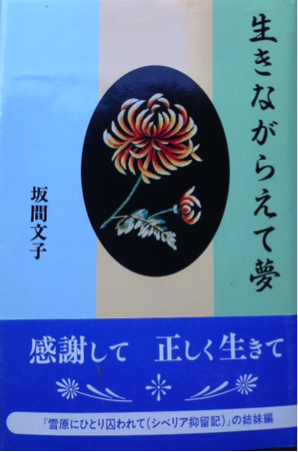 All of the people returning home were gathered at Khabarovsk. During the two months she stayed in the gulag there, she joined the Haiku poetry club. She met a man, major general Kun’ichi Sakama in the club. It was 1955 when Koanmaru, a ship from Japan, came to pick them up at the port of Nakhodka, facing the Japan Sea. It had been ten years since she was abducted from Dalian. Her younger sister came to see her at the port of Maizuru, and they hugged each other, celebrating their reunion.  However, it was not Dalian where she grew up. Living in Japan, with totally different weather from Dalian was the first experience for her. Nevertheless, she was thrilled at starting a new life without any fears.

She could see stores full of merchandise and she didn’t see any women in work pants. Instead, she saw women dressed up with make-up on and men in jumpers. Fumiko was expecting something less “extravagant”. At that time, there was a gathering called promotion of the homecoming for the formerly detained in Siberia, and they were working hard with the government and the nation to help everyone come home from Siberia as soon as possible. She met Kun’ichi again in that gathering. He came home a year before she did and was informed of the death of his wife on the ship while returning home. Fumiko also lost her mother after she came back. Three years after she came back, on the emperor’s birthday on April 29th, Fumiko Akahane became Fumiko Sakama, the wife of Kun’ichi Sakama at the Meiji shrine. 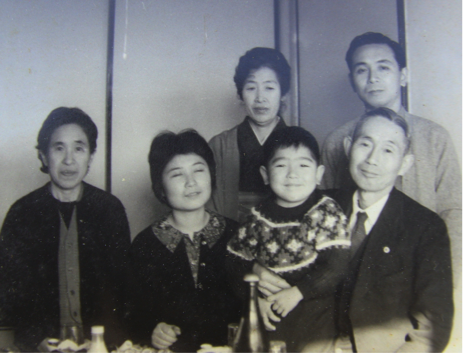 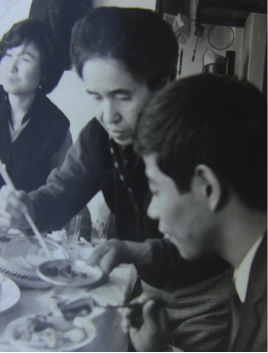 Fumiko’s life afterwards seemed to be happy with Kun’ichi’s daughter, Masa as another family member. She gradually got used to the new daily life. Kun’ichi was a wonderful husband who helped her with various housework such as doing laundry, hanging them on the poles, and taking garbage out. When he began editing work for the International section of Japan of the Encyclopedia Britannica, she began to help him. According to Masa, Fumiko did not seem to have any particular resentment against her life of detainment in Siberia at the end of her life.  Masa told me Fumiko was enjoying making Russian dishes such as frozen salted herring and cabbage sauerkraut, and she enjoyed going out to eat Russian food. At the age of 98, after overcoming her hardships in Siberia and creating a new life, Mrs. Fumiko Sakama passed away  quietly on August 12, 1998.