This is a map that shows the locations of camps all over the former Soviet Union.

There were numerous internment camps that kept people who were judged by the Communist Party as anti-government.  Internees included political offenders, criminals and prisoners of war from other countries.

By forcing them to live under extremely difficult conditions, Stalin aimed at creating the spirit of allegiance to his Communist party.  Some received small amount of payment, and some did not receive any.

Mostly, their free labor was essential for the establishment of various basic needs in the area.

Japanese internees were especially highly valued because of their accomplished abilities in different fields, intelligence and diligence.  Other than the Japanese, there were over 2,000,000 prisoners of war from Germany, Axis powers such as Italy, Hungary, Romania, Bulgaria, and Finland, the countries that were united at the beginning of WWII such as Three Baltic States and Eastern Poland.  They were all forced to work in cruel conditions.  The Japanese were physically much smaller than others, but they had to work under the same conditions.  That resulted in a higher mortality rate among the Japanese. 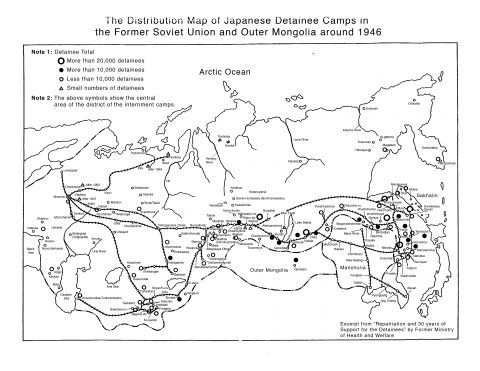